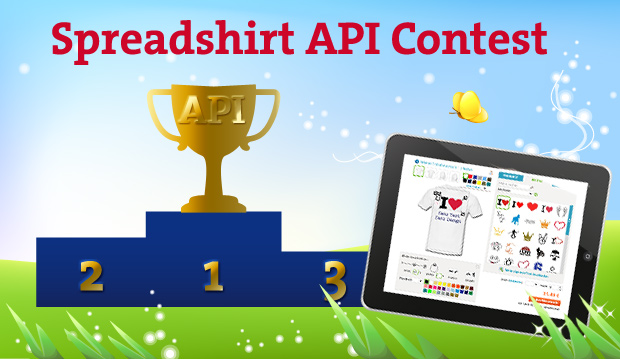 The past few days we’ve presented the 14 submissions for Spreadshirt’s 1st ever API contest. Now we’re ready to name the winners! As you saw in Martin’s posts (Part 1 and Part 2), we broke the submissions down in to 5 different categories. The majority of the submissions fell into the category “bringing different types of content to clothing”. In the API contest’s description, we purposely decided against laying down clear category boundary lines – but this is still covered within our platform strategy. The fact that many of the submissions fell into this type of category has influenced how we approach our API and how future contests will be organized. But, more on that at a later date.

Intro out of the way, let’s get to the winners! After lots of meetings and hefty discussion, we decided to award the prizes as follows:

Martin has written descriptions about each of the apps. That’s why we’ll give a “global explanation” of how the jury came to their decisions.

As we have written many times and repeated in our API presentation: our strategy is to bring different kinds of content onto t-shirts. That’s why a focus was placed on mashups like Face it Shirt or ShirtGraph.

We also continue to be interested in integrating other systems according to the multi-channel principle. Apps that fall into this category are Shirtpress (which, compared to the second WordPress submission, had a better layout and didn’t use an iFrame), Drag to Shirt (very easy to integrate into websites) or SnapShirt (Android app). We also all had Draw it Yourself on our list of favorite apps – even though its development wasn’t completely finished, the tool has a lot of potential and uses the t-shirt as a surface to express creativity, almost like a canvas.

We’d also like to take this chance to highlight the QR apps. We especially liked QR Code Shirt and qrshirt.mobi because they had a nice and intuitive user interface. We also nod our heads at the very comprehensive software by t-shirtselbstgestalten. Even though these three apps didn’t make it up on the podium, we were really excited about the ideas and complexity that were put into the projects. As a small consolation prize, we would like to thank these three developers with a 12 month premium membership.

Many thanks as well to all of the participants (check your inboxes) and hope that you continue to tinker with our API!

More from this site